The mid-Atlantic region experiences a broad range of stressors that characterize evolution of the system, including hurricanes, droughts, and sea level rise.   Exchange of water flows and their biogeochemical constituents is essential to adequately represent coastal systems in Earth system models.  For example, water flows originate in upstream water sheds, collect in river networks that enter coastal estuaries, and flow in estuary-to-coastal-to-global ocean exchanges.  Mixing within and across these component boundaries is modulated by atmospheric, anthropogenic, and subsurface interactions, as under consideration in the MSD, RGMA, and SBR portions of this project.  The response to these dynamic processes is characterized by high-resolution and multicomponent processes within coastal areas.  A unique coastal Earth system modeling capability is being developed for the Energy Exascale Earth System Model (E3SM) by 1) adding couplings and processes to represent water and biogeochemical flows, and 2) use of multiresolution, consistent meshes between the land-river-ocean for explicit resolution of coastal processes. 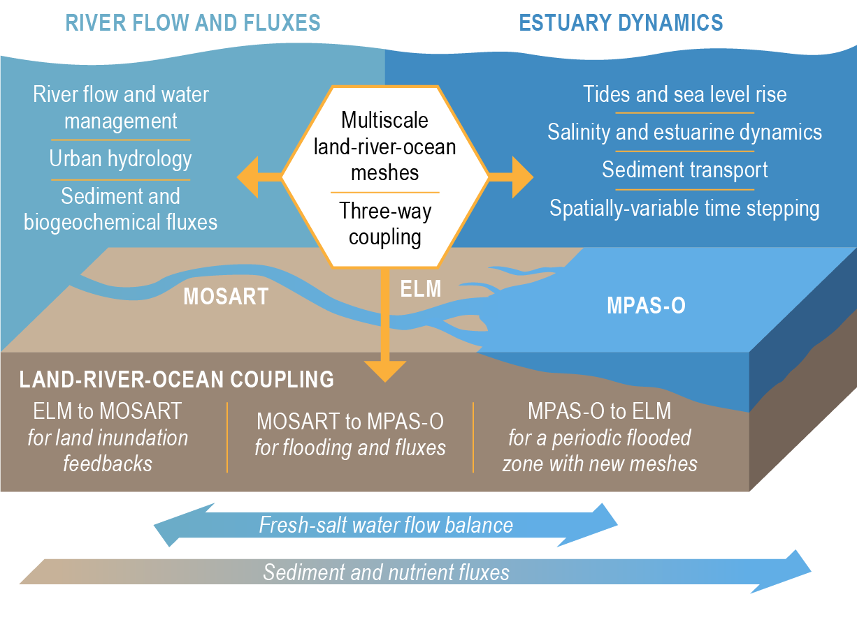 Many different land and river processes control riverine fluxes of sediment, heat, and biogeochemical constituents to the estuary.  These processes are influenced by a variety of factors including land use and land cover changes, evolving urbanization, and secular and extreme climate drivers.

The river component of the E3SM is the Model for Scale Adaptive River Transport (MOSART).  MOSART development activities will include improvements to river water management, hydrograph representation, and their effects on inland flooding; development of urban hydrology; and tuning and validation of MOSART riverine fluxes. Development of a new watershed model, consistent with the hexagonal unstructured meshes in E3SM, will enable high-resolution of regionally refined watersheds.  Use of a consistent mesh between the land-river-ocean will enable consistency for accurate simulation.  These activities will pave the way for two-way coupling between the land, river, and ocean.

The ocean component of the E3SM is the Model for Prediction Across Scales Ocean (MPAS-O).  MPAS-O development activities will include addition of tidal processes, improved shallow water mixing schemes for estuarine simulation of salinity evolution, development of sediment transport, and the addition of spatially variable time stepping to facilitate use regionally refined high resolution in coastal areas.  These capabilities will enable MPAS-O to be used as a regional coastal model that enables global-to-coastal-to-estuary ocean simulation.

E3SM components (e.g., land, atmosphere, river, ocean, etc.) run on different computational
grids with different timesteps.  At component synchronization time, the data between E3SM components is exchanged via the coupler, including interfacial states and fluxes. Atmospheric ocean and land fluxes (e.g., for heat) are already currently two-way coupled. However, land–river–ocean coupling is not currently fully implemented, in part due to mesh deficiencies. Ensuring tight and compatible coupling between land, river, and ocean model components is critical to enable the consistent exchange of fluxes and dynamic state at model interfaces.  Use of unified meshes between the land-river-ocean components paves the way for next generation simulation of regionally refined processes as needed for coastal Earth system modeling.

In order to resolve complex dynamics of coastal systems within E3SM, we are developing three-way coupling between ELM, MOSART, and MPAS-O via completing two-way coupling of MPAS-O, MOSART, and ELM with each other in pairs. An E3SM simulation component set that uses active land, river, and ocean components, along with a data atmosphere model, will be developed under this project.