The mid-Atlantic region experiences a rich diversity of extreme weather phenomena across all seasons. Most notable among these are the strong winds and heavy precipitation associated with extratropical winter storms, summer convective storms, and tropical cyclones. On longer timescale, droughts have also occurred frequently in the past. Extreme events can have profound impacts on human and natural systems in the region. The RGMA program area addresses key gaps in understanding extreme events and their future changes in the mid-Atlantic region by improving understanding of the roles of large-scale meteorological patterns (LSMPs) and surface-atmosphere interactions in controlling storms and droughts. Both extratropical cyclones and droughts are strongly influenced by the large-scale circulation so understanding potential changes in relevant LSMPs will be fundamental to understanding how extratropical storms and droughts respond to warming. For summer convective storms and hurricanes, the focus is on the impacts of surface-atmosphere interactions on these storms. As the Mid-Atlantic region features juxtaposition of urban and rural areas over land, land-sea contrast along the coast, and ocean eddies in the nearby Gulf Stream, understanding the impacts of surface-atmosphere interactions in the complex environment is critical to improving predictions of summer convective storms and hurricanes in the future. 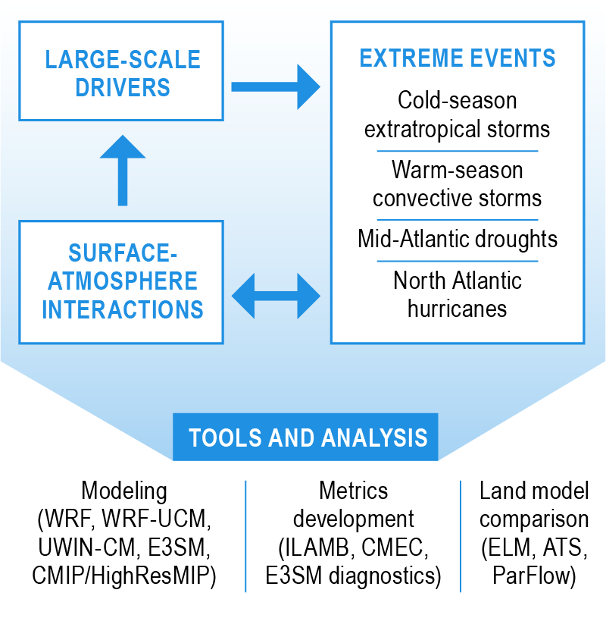 1. What are the large-scale drivers of extreme events affecting winter storms and droughts in the Susquehanna and Delaware basins in different seasons?

2. What are the roles of surface-atmosphere interactions on hurricanes and summer convective storms in the complex environment of the mid-Atlantic region?

Cool-season extratropical cyclones (ETCs) have significant impacts on the energy, agricultural, and transportation sectors in the northeastern U.S. While these events can cause great societal harm, they remain one of the more poorly understood climate extremes, particularly storms that produce ice and freezing rain. Winter and springtime precipitation extremes in the the mid-Atlantic overwhelmingly involved an ETC or ETC-associated front. ETCs also drive the vast majority of storm surge events and high streamflow events in the region. Research will be undertaken to improve understanding of the large-scale atmospheric and land surface drivers of cool-season storms, evaluate how well Earth system models simulate these drivers, and investigate how the frequency, magnitude, and spatial extent of such extremes may change in the future.

Droughts are among the costliest and widest-reaching natural disasters. The most notorious drought in the northeastern U.S. including much of the mid-Atlantic region occurred in 1962-67, but other droughts over the past few centuries may have had longer durations. More recent droughts have also occurred, including 1980-1981 and 2001-2002, albeit with shorter duration. It is generally expected that warming will lead to more runoff and less snow accumulation and exacerbate future droughts, but an analysis of 20th century trends in drought severity, frequency, and duration found that drought in this region has been less severe than in the past. Hence, there is a pressing need to revisit mid-Atlantic drought scenarios in light of climate change and recent advances in Earth system modeling. We will study the predominant large-scale atmospheric rivers of drought in the mid-Atlantic region, evaluate how well Earth system models capture drought in the region, and examine how changes in meteorology and land use land cover in the future may influence drought through dynamical and thermodynamic changes.

Tropical cyclones or hurricanes constitute some of the most devastating weather systems in the global tropics and sub-tropics, including the North Atlantic. Mesoscale eddies in the ocean can significantly impact hurricane intensification through modulation of hurricane-induced sea surface cooling and air-sea enthalpy fluxes. Hurricanes that impact the U.S. mid-Atlantic coast must traverse the western boundary of the North Atlantic Ocean, which is characterized by strong eddy activity and sharp SST fronts associated with the Gulf Stream. Recent research has indicated long-term warming over the sub-tropical western boundary currents, including the Gulf Stream, associated with the expansion of Hadley cells, which could influence air-sea interactions. These complex interactions will be investigated by analyzing how the Gulf Stream eddies affect hurricanes near the mid-Atlantic coast, contrast the impacts to those associated with eddies shed by the Loop Current in the Gulf of Mexico, and evaluate the role of sea surface temperature fronts and upper-ocean thermal structure in hurricane intensification in the study region.

The mid-Atlantic region features complex environmental gradients marked by strong urban-rural and land-sea contrasts. Climatologically, there is a sharp decrease in convective storm frequency near the Atlantic coast as storms cross the land-ocean boundary, but the modification of individual storms depends on the surface wind regimes, which are influenced by land cover and orography. A significant portion of the mid-Atlantic region is covered by metropolitan clusters surrounded by rural areas. Urbanization can have a significant effect on warm-season convective storms, but the combined effects of urbanization and land-sea contrast in the mid-Atlantic environment has not been investigated. To fill this gap, we will study how land-atmosphere interactions affect summer storms differently in coastal vs. inland urban areas, downwind vs. upwind areas of cities, and during weakly-forced vs. strongly synoptically-forced weather regimes. We will also evaluate how land-atmosphere interactions and their impacts on summer convective storms are influenced by warming in the future.

To understand and evaluate uncertainties in modeling soil hydrological processes and how they influence the simulated soil moisture and groundwater table, three land models will be evaluated and compared over the Susquehanna and Delaware basins. These include the E3SM Land Model (ELM), which is representative of one-dimensional land surface models used in Earth system models, and two three-dimensional soil hydrology models including the Advanced Terrestrial Simulator (ATS) and ParFlow models. This land model intercomparison will leverage and be coordinated with activities in the SBR program area that prominently feature the use of ATS to understand surface water and groundwater response to extreme weather events.