The frequency and intensity of flooding has been increasing and is expected to increase in the mid-Atlantic region. Improving our ability to simulate these extreme events and understand how they might be changing is a primary focus of this task. Multiple models and approaches are being developed to simulate coastal dynamics across the ICoM project. Our approach in this task is to use several different models to perform simulations, including case studies of specific extreme events (e.g., storylines), as well as longer simulations, and then compare results across different models and scenarios to gain insights into key uncertainties. In additional to models being used in RGMA, ESMD, SBR, and MSD, we are introducing several new models, in addition to enabling capabilities that support tasks across the ICoM project. For example, we will introduce new high-resolution model using DHSVM, FVCOM, and RIFT to simulate coastal, fluvial and pluvial flooding in mid-Atlantic metropolitan regions, in addition to developing a new computational grid using the JIGSAW package to ensure consistency of numerical experiments across the ICoM project. 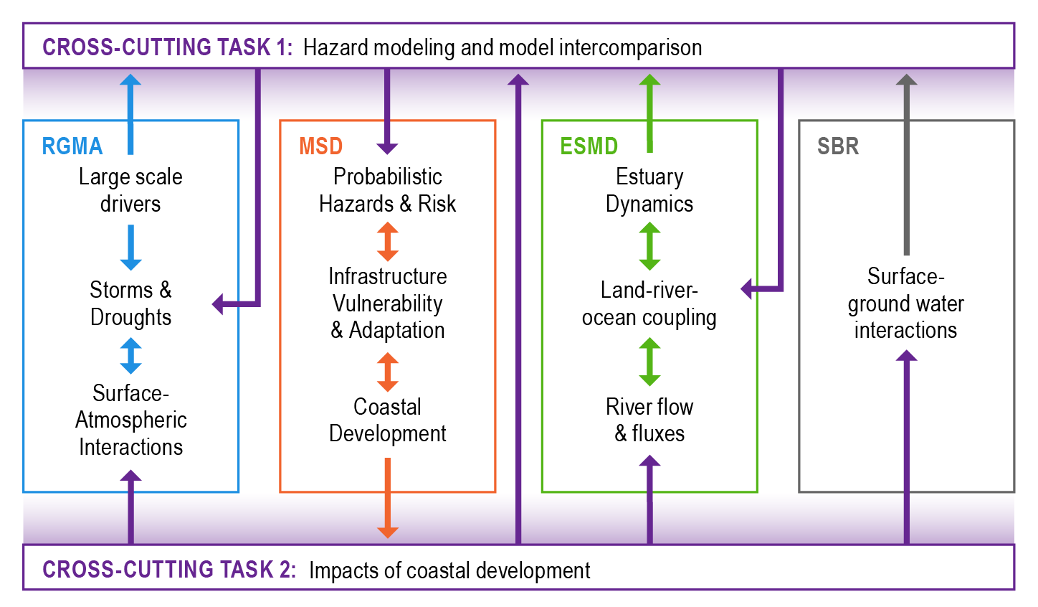 The culmination of these activities is intercomparison experiments based on case studies, including both historical and projected future tropical cyclones. Sensitivity experiments will be used to explore the effects of changing resolution or the removal of key processes and couplings to increase our understanding of how important these features are in the context of specific events. In addition to characterizing the strengths and weakness of different modeling approaches, which is inherently valuable for the RGMA and MSD program areas in the context of specific science questions, these intercomparisons will benefit the ESMD and SBR program areas by providing higher-resolution simulations that can be used as a benchmark for E3SM and ATS to help guide future developments.

The evolution of coastal systems is strongly shaped by human activities and there are large uncertainties in how these interactions will play out in the future. Understanding these uncertainties requires modeling the influence of urbanization, land use and land cover change, and other coastal development patterns for key natural system processes including flooding, land–atmosphere interactions, and coastal biogeochemical responses like hypoxia.

Flood modeling case studies under multiple future development scenarios including those for urbanization and agriculture will be analyzed across different hydrology models to characterize how development patterns could modify flooding intensities.  A subset of these case studies will be re-run with infrastructure models to evaluate corresponding potential changes in flood risk. These experiments will close the loop to understand the combined influence of human and natural system changes in driving flood hazard and risk changes in the mid-Atlantic region.

Influence of coastal development on droughts and convective storms

Influence of coastal development on sediment transport and hypoxia

Coastal development and other land use changes influence sediment transport and hypoxia in the mid-Atlantic region. To study how land surface changes are influencing sediment transport and nutrient fluxes, experiments run under different coastal development and land use change scenarios will be used to understand the influence of development patterns on river sediment and nutrient loadings, which drive hypoxic conditions.  Sensitivity experiments for hypoxia under complex multi-decadal changes within the coupled human and natural systems will illustrate the response of the natural system to coastal development.

Global Earth System Models are important tools in understanding future climate conditions. With increasing model resolution, we can now start to understand how changes at the global scale will affect smaller, local regions; a critical region for focused study is the coastal ocean. About 40% of the world’s population lives within ~100km of a coast, and the coastal ocean receives and processes the entire freshwater runoff from land. As such, the coastal ocean affects, and is affected by, a wide variety of human systems. These tools and analysis techniques aim to assess and improve our ability to understand regional climate change.

The representation of coastal processes in coupled Earth system models is often constrained and simplified by details of the underlying numerical methodology. Ocean, land, and river dynamics are typically represented using separate, incompatible computational grids and numerical discretisations, and are coupled together via somewhat ad-hoc interpolation across component boundaries.

Here, we are developing an alternative unified approach in which all land, river, and ocean components are represented using a common multi-scale unstructured mesh, and employ compatible numerical formulations and interpolation-free coupling across embedded interfaces. In contrast to conventional strategies, this unified approach does not rely on a hierarchy of nested sub-models to resolve coastal processes, but rather leverages the flexibility of the multi-scale Energy Exascale Earth System Model (E3SM) to seamlessly embed high-resolution domains within global model configurations.

Our unified modeling strategy is built on an unstructured Voronoi-type meshing workflow, in which a global surface mesh conforming to various coastline, river network, and land process boundaries is built using the JIGSAW meshing library. The unstructured grid layout enables coupled physics to be discretised over the sets of staggered edge-, triangle-, and polygon-based control-volumes, leading to a conforming representation of both coastal geometry and physical processes. 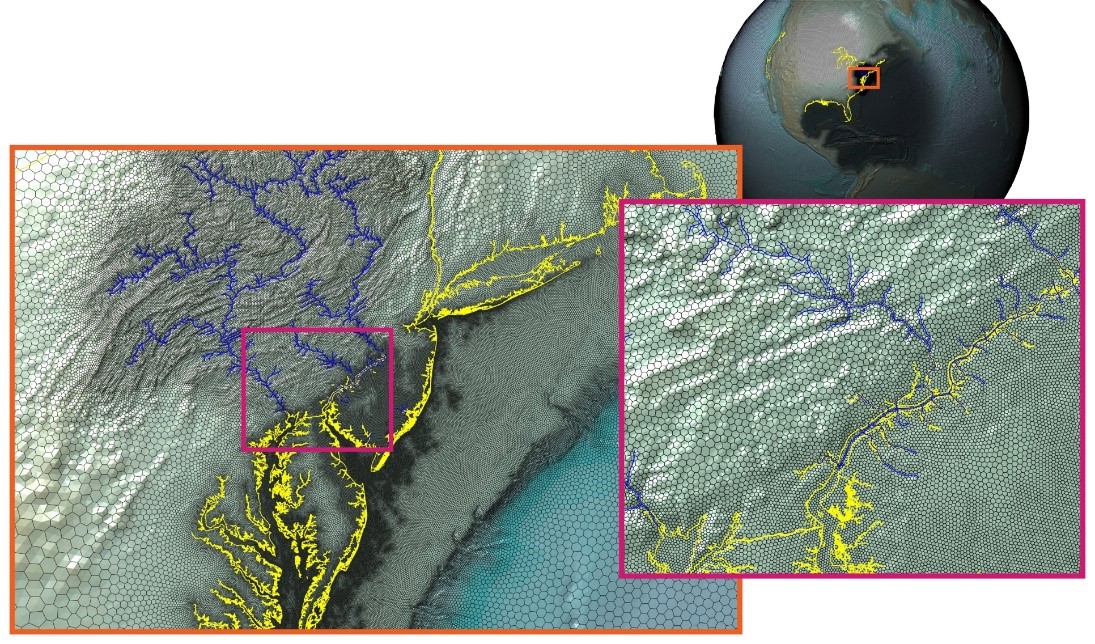 Coastal hazards associated with temperature, salinity, water quality, and constituent transport are all affected by baroclinic transport processes. Accurate representation of baroclinic processes in ocean models requires three-dimensional simulations with relatively fine spatial resolution. Accurate numerical representation of tracer transport and mixing has been a primary challenge in coastal and estuarine modeling for the last decades. A goal of ICoM is to develop earth system modeling capabilities at coastal scales, in particular, regional ocean modeling at horizontal scales of ~1km or less, an order of magnitude increase in resolution compared to conventional global earth system models. The increase in resolution will allow a host of coastal and estuarine processes to be resolved that are not present in coarser global simulations. However, MPAS-O--the ocean modeling component of E3SM--has not yet been evaluated at simulating coastal processes at these smaller scales.

To understand and evaluate a model's representation of nonlinear processes, appropriate metrics must be designed to isolate and measure these processes. Unfortunately, it is nearly impossible to obtain data at high enough spatial and temporal resolutions to accurately constrain and reliably compare different model simulations. Because of this, the coastal modeling community has long relied on idealized simulations to isolate and study different coastal processes. Idealized test cases allow explicit comparison between different models' representation of particular physical processes, and can thus be used to place differences in realistic simulations in context.

Robust representation of coastal scale processes will provide the foundation for other ICoM cross-cutting activities, such as simulations of estuarine and coastal sediment transport and hypoxia, and will allow us to address key questions such as: How do tracer transport and mixing processes through the river-estuary-ocean continuum influence the total coastal ocean state? A particular focus of this study will be to assess how well our models represent these processes, the impact of numerical approximations on the simulated total ocean state, the magnitude of numerical mixing, and the primary bias in numerical representations of estuarine and coastal ocean state.

In-situ observations are invaluable for grounding and guiding modeling efforts, but they are often too sparse to meaningfully aid the development of Earth system models. On the other hand, satellite images are often available at high space and time resolutions, but rarely directly observe relevant quantities of interest including sea surface temperature (SST), sea surface salinity (SSS), and turbidity. In this task, we aim to blend in-situ data with satellite observations to create near-daily, spatially-continuous maps of SST, SSS, and turbidity across the Chesapeake and Delaware Bays. We use machine learning to develop relationships between in-situ data collected by a variety of agencies and organizations and spectral reflectances seen by the MODIS family of satellites at a resolution of 1km2/pixel. Applying our models to MODIS imagery provides historical and real-time information about ocean surface dynamics that will guide model initialization, calibration, and validation.